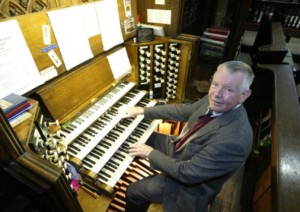 Philip Croft Tordoff was born in Cleckheaton and educated at Whitcliffe Mount Grammar School and Downing College, Cambridge where he was Organ Scholar. Having gained the ARCO at the age of 17, he became an FRCO in 1960. He joined the staff of Hipperholme Grammar School as its first ever Music Master in 1961 and stayed there for thirty-six years. Following organ posts at Broomfield Methodist, St Andrew’s, Oakenshaw and St John’s, Bierley he was appointed to Halifax Parish Church, now Minster, in 1971, where he is now Organist Emeritus. He has given recitals around the country, including King’s, St John’s and Trinity Colleges, Cambridge, and at Liverpool Anglican, Bradford, Wakefield and Newcastle Cathedrals.